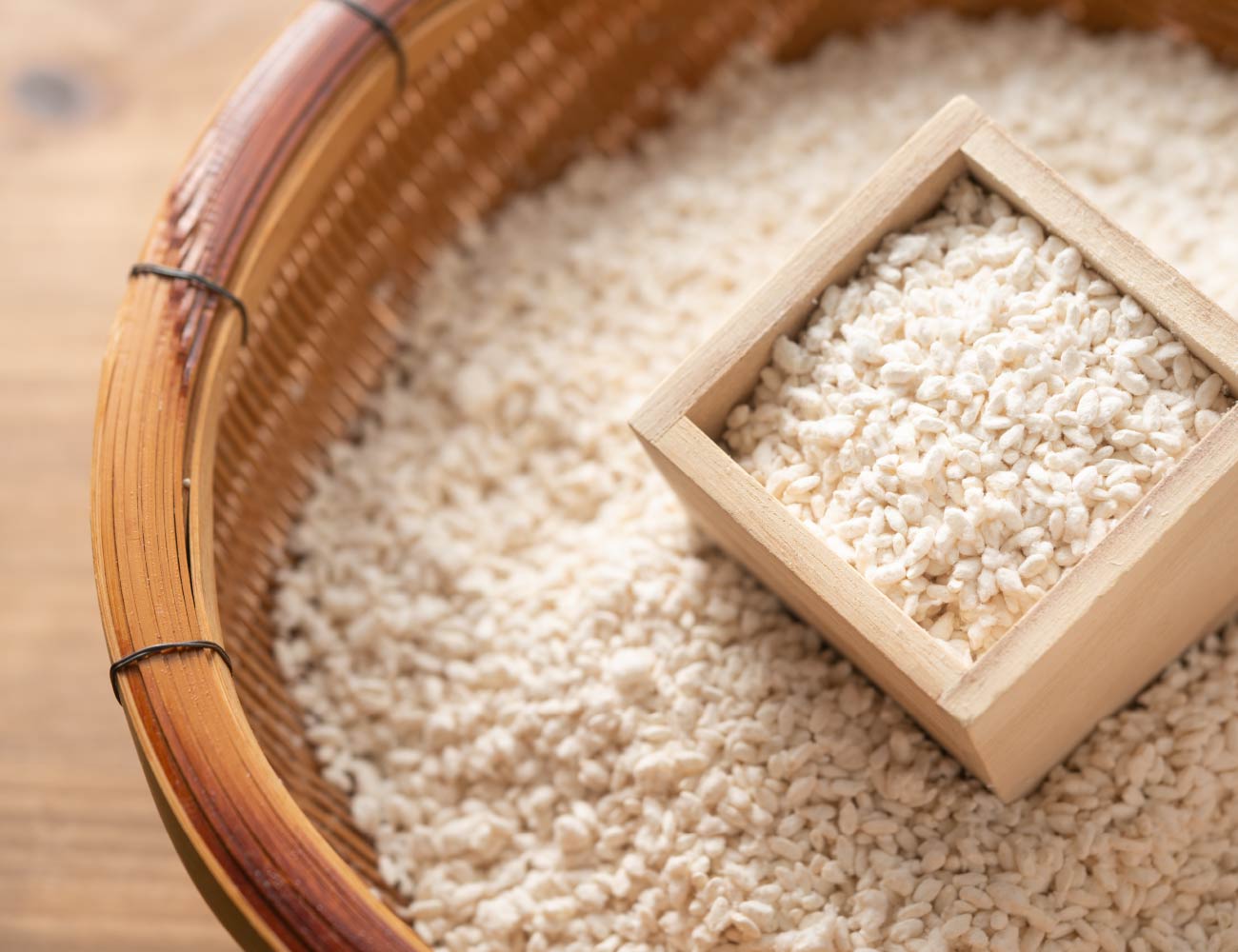 Koji is an essential ingredient that is used in all types of shochu. Unlike the more specific types of koji used in sake, shochu making employs a wide variety of koji.

What Does Koji Do?

There are three main functions of koji in shochu production.

First, koji is essential to start alcoholic fermentation in shochu making. The enzymes in koji mold break down the starch content of the raw ingredients into sugar. This process is called saccharification. Saccharification is vital because most raw ingredients contain a lot of starch but little sugar. Yeast converts sugar into alcohol, but not starch. Therefore, creating sugars from the abundant starches is necessary to produce alcohol.

Second, koji produces the flavor components of shochu. Enzymes in koji mold break down starch, protein and fat content into various compounds. Along with esters produced by yeast during fermentation and products of Maillard's reaction made during distillation, koji enzymes create the distinct taste and aroma of shochu. For example, the koji enzymes in awamori decompose the rice cell wall. This leads to the formation of vanillin, a precursor of the sweet vanilla-like aroma of awamori. On the other hand, koji enzymes in sweet potato shochu interact with glycosides in sweet potatoes to release monoterpene alcohol. Monoterpene alcohol is an aromatic compound also found in citrus fruits and grapes, characterized by a fresh scent. 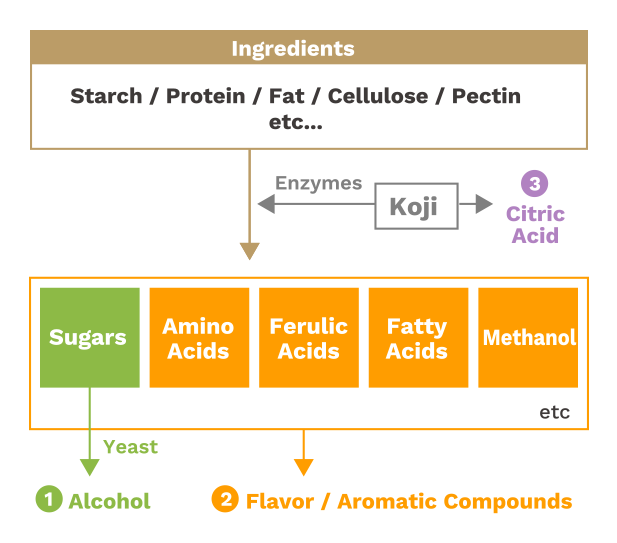 Yellow koji mold, Aspergillus oryzae​​, has been widely used for sake brewing across Japan for centuries. Therefore, yellow koji mold was the first koji mold used for shochu making in most areas, except for Okinawa. However, yellow koji mold does not produce acidic compounds. Therefore, it was difficult to keep the fermenting mash from spoiling, especially in the warmer climates housing most shochu production. Sake brewers avoid this problem by cultivating lactic acid-producing bacteria in the mash to make it acidic. By the early 1900s, citric acid-producing black koji from Okinawa replaced yellow koji in shochu making. Although it takes extensive care to use yellow koji mold in warmer regions, this type can bring out a fruity and floral aroma in shochu. 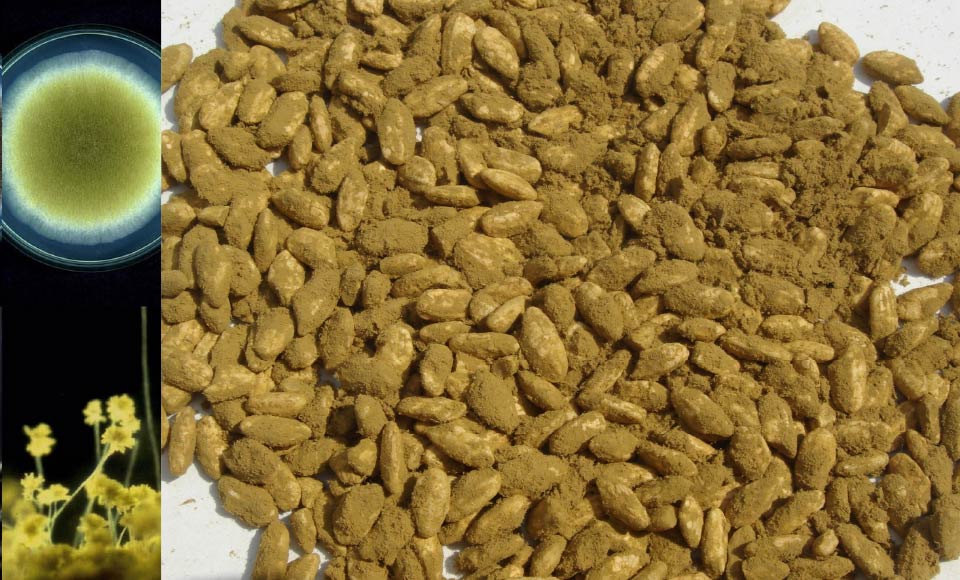 Black koji mold, Aspergillus luchuensis, has been used in Okinawa for centuries to make awamori. It produces citric acid, which keeps the fermenting mash acidic and away from harmful airborne microorganisms. Around 1912, shochu producers in Kagoshima started to use black koji in their sweet potato shochu, and soon distilleries in other regions followed, improving both quality and production yield of shochu dramatically. When compared to white koji mold, black koji mold tends to highlight the flavors of the ingredients more in sweet potato shochu, and gives a light sweetness and memorable finish to the finished product. 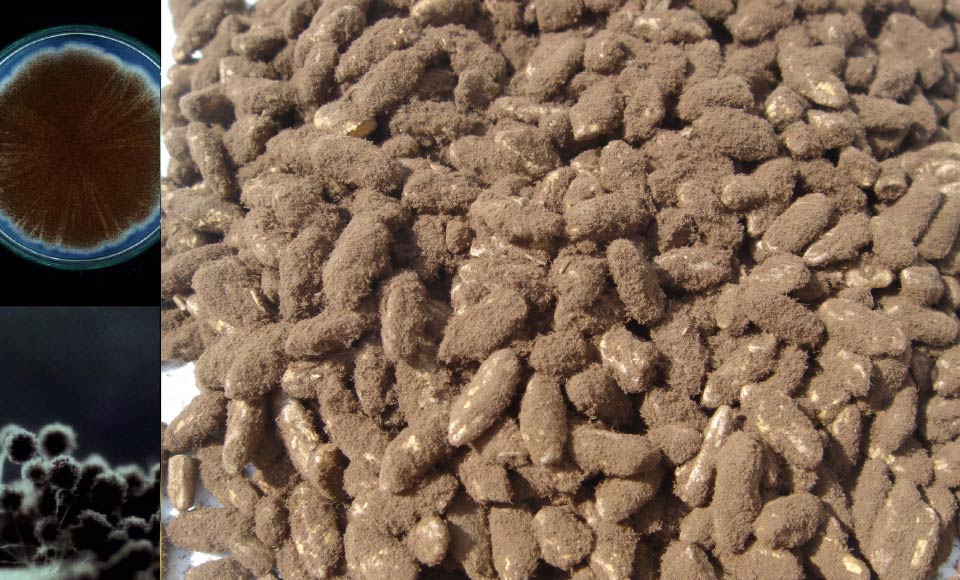 White koji mold, Aspergillus luchuensis mut, Kawachii, is a mutant variety of black koji mold, discovered by Genihciro Kawachi at the Kagoshima Taxation Bureau in 1918. It shares the same properties of black koji mold, including the ability to produce citric acid, except it is white instead of black. Distilleries often prefer white koji mold over the black variety since it keeps the facilities and work clothes look cleaner. White koji mold tends to make a smooth and round flavor of the ingredients in the final product. 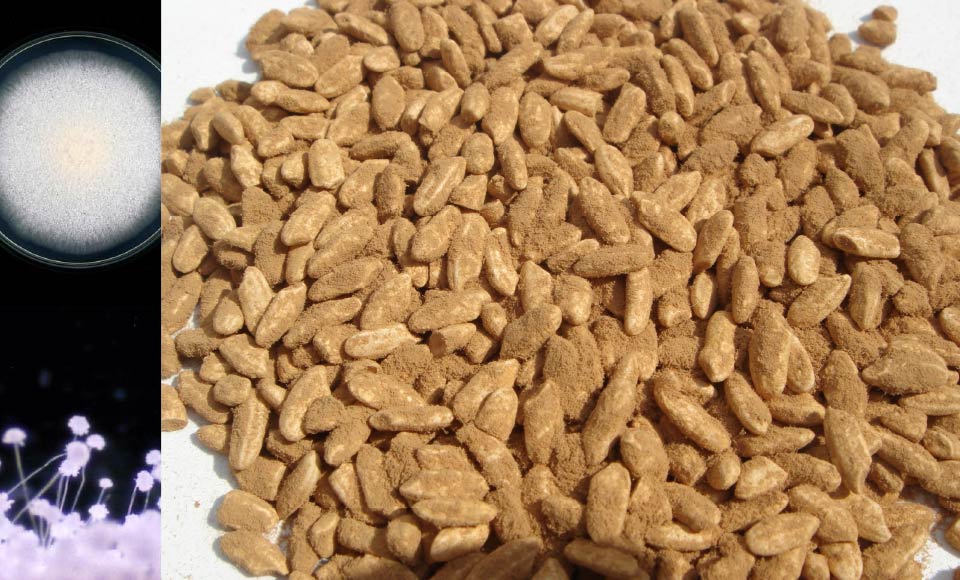 Since the basics of koji-making come from techniques used in sake brewing, shochu makers also adopted the use of rice koji. These long refined cultivation methods enhance the inherent growth properties in the koji mold. Together, they facilitate koji mold cultivation on and within grains of rice, producing abundant enzymes necessary for shochu making. One notable difference is the rice used for koji making in shochu has a lower polishing rate, around 86-90%, than rice used for making sake.

Despite the great variety of koji in shochu making, rice koji is still the most widely used. It is the most popular choice for rice-based shochu, such as awamori and Kuma shochu. Shochu makers also use rice koji for most non-rice based shochu, including Iki’s barley shochu and most sweet potato shochu. 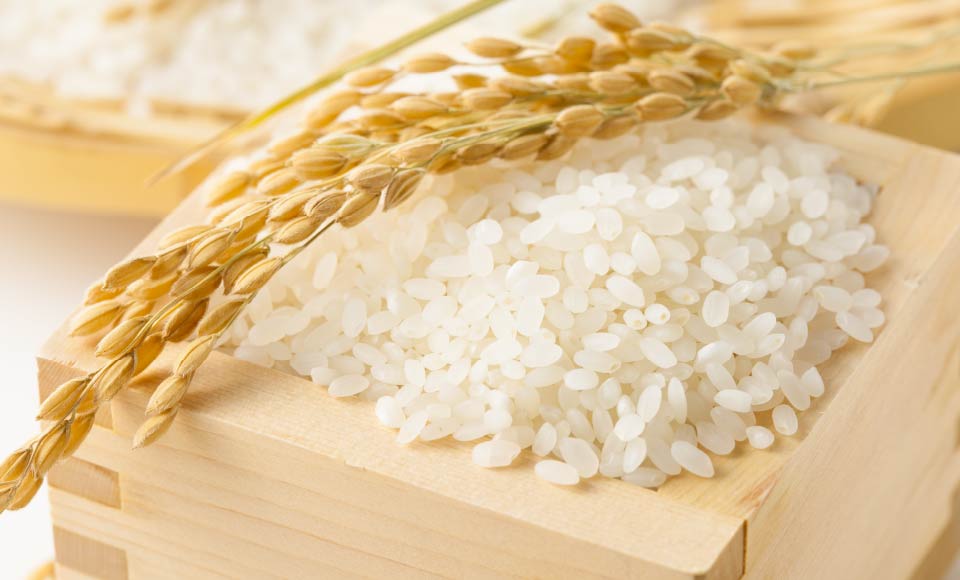 Northern Kyushu has enjoyed an abundance of barley crops for centuries. However, the use of barley koji in shochu making only started in the 1970s. One of the main challenges of making koji with barley is the limited proliferation of the koji mold. There is a thick aleurone layer on the surface of barley grain. This makes it difficult for the koji mold spores to reach and grow on the starch-rich endosperm. Koji mold only grows on the surface of the barley grain, causing insufficient production of necessary enzymes. Therefore, barley shochu was usually made with rice koji. 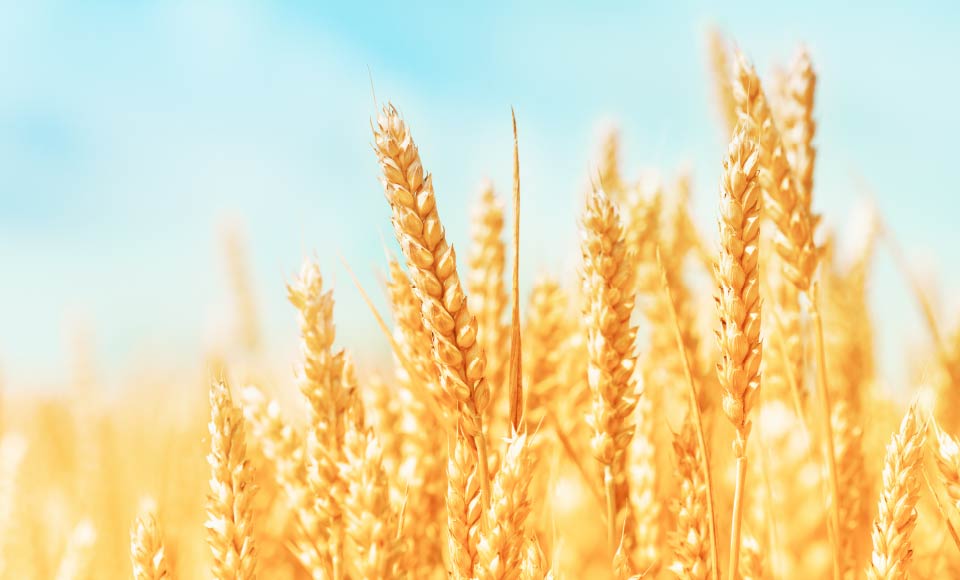 Sweet potato is a relatively tough raw ingredient to make koji with. Steamed sweet potatoes are susceptible to harmful bacteria and too moist for koji mold to grow on. On the other hand, dried sweet potatoes tend to get oxidized and spoil the flavor of the final product. For this reason, sweet potato koji was not often used in production until recently. 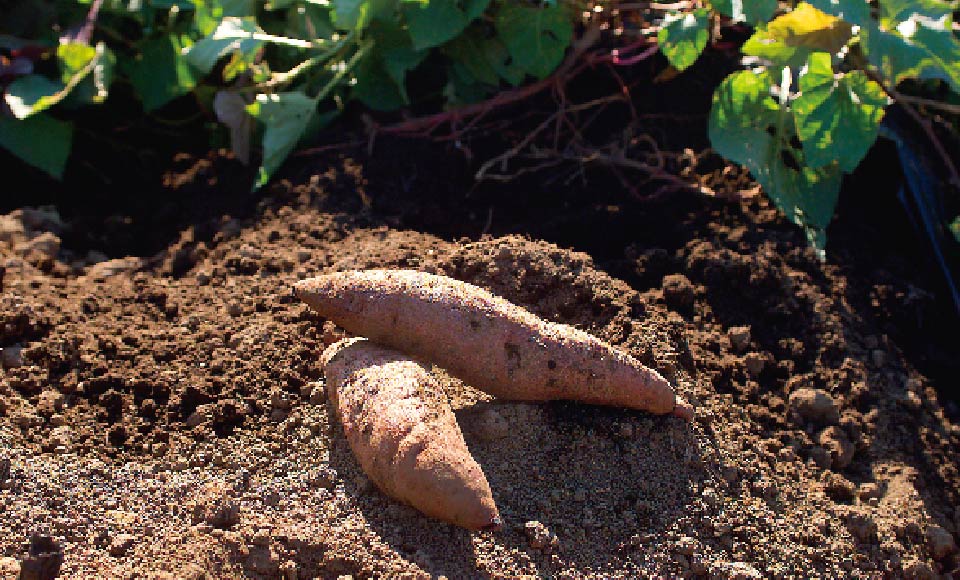 Making koji with buckwheat is fairly difficult. After steaming the grain, the surface becomes too viscous for the koji mold to grow properly. In 1973, a distillery in Miyazaki Prefecture successfully produced soba shochu, but the product used rice koji instead of buckwheat koji. Finally, in 2007, a producer based in Kyoto developed a technique to make good quality buckwheat koji. Shortly after, they launched the very first 100% buckwheat shochu. 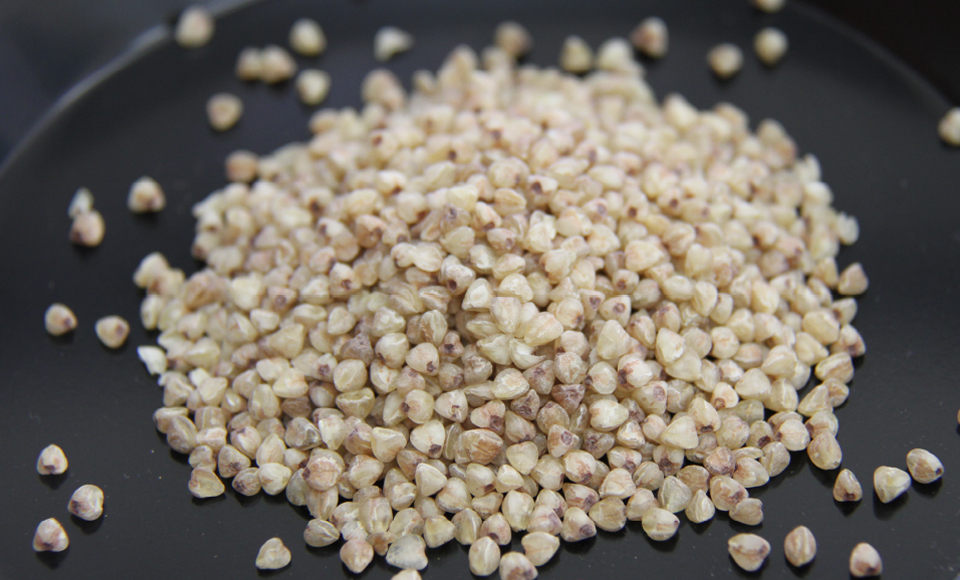 Although there are different types of koji mold and raw ingredients, the basic koji making process remains the same for all types of koji. Here is an overview of how rice koji is made at shochu distilleries.

Traditionally, koji making was all done by hand, using the same equipment for koji production in sake. However, the traditional method is labor intensive, and many distilleries have automated some of the processes. Big distilleries use large rotary metal drums or conveyor belts for washing and steaming the raw materials and making koji.