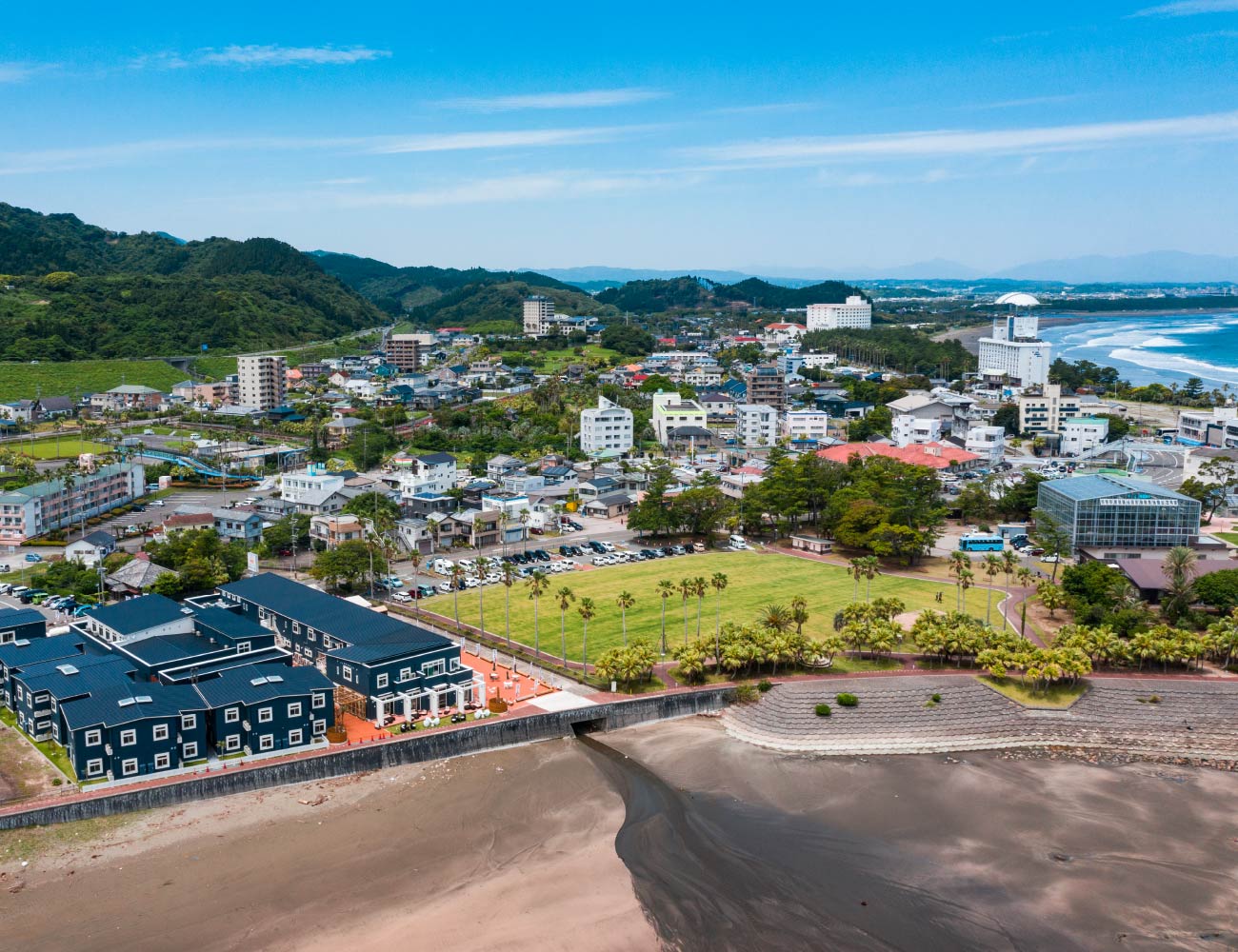 Miyazaki Prefecture is located in southeast Kyushu, known for its warm and sunny climate. The western, inland region is mountainous, housing Mt. Sobo in the north and Kirishima mountain range in the south. High-quality spring water flows from the mountains through the Miyazaki Plain towards the ocean. The eastern coastline stretches 405 km from north to south, housing fishing ports and beautiful beaches popular for tourist destinations.

Miyazaki is known for hosting training camps for various professional sports teams and attracting both domestic and international sports events. It is also a popular tourist destination rich with nature, from the sparkling Nichinan coast to the scenic Takachiho Gorge. Highlights of historical spots include a cave where the goddess, Amaterasu Omikami is believed to have hidden in Japanese mythology and the 1000-year-old Aoshima Shrine. As a shochu producer, Miyazaki boasts the largest production volume and an extensive variety of shochu in Japan. 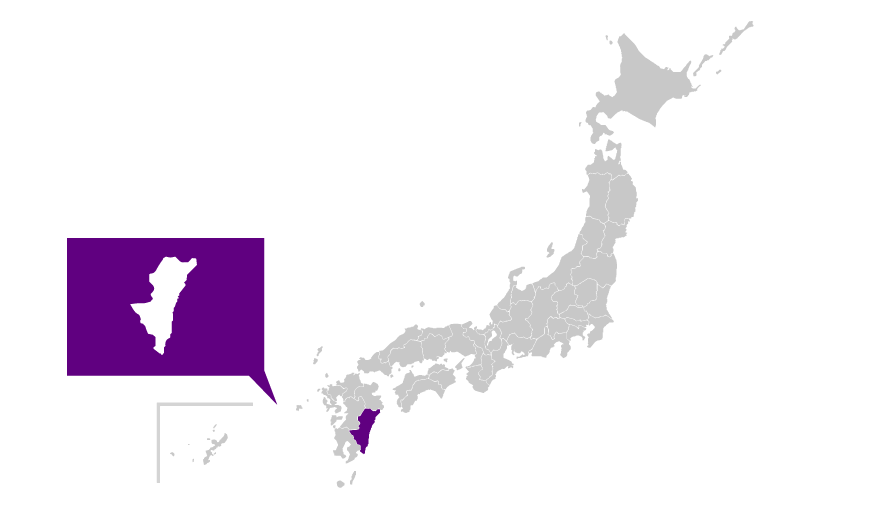 Miyazaki is temperate, with an average temperature of 17.4℃, thanks to the warm “Kuroshio” current of the Pacific Ocean. The prefecture is known for its sunny climate. It has an annual average of 53 sunny days, ranking 2nd in Japan, and 2116 hours of sunshine, ranking 3rd in Japan. The average annual precipitation is 2509mm, with heavy rainfall during typhoons from summer to autumn. While the coastal area gets little snow in winter, the mountains get a significant amount of snowfall. 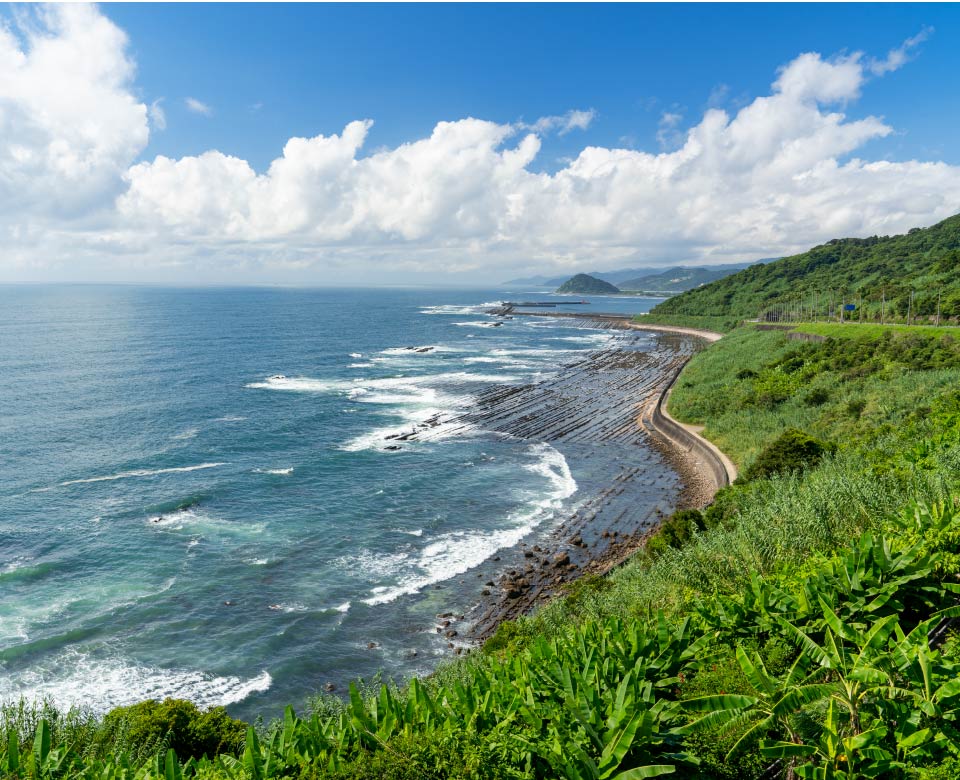 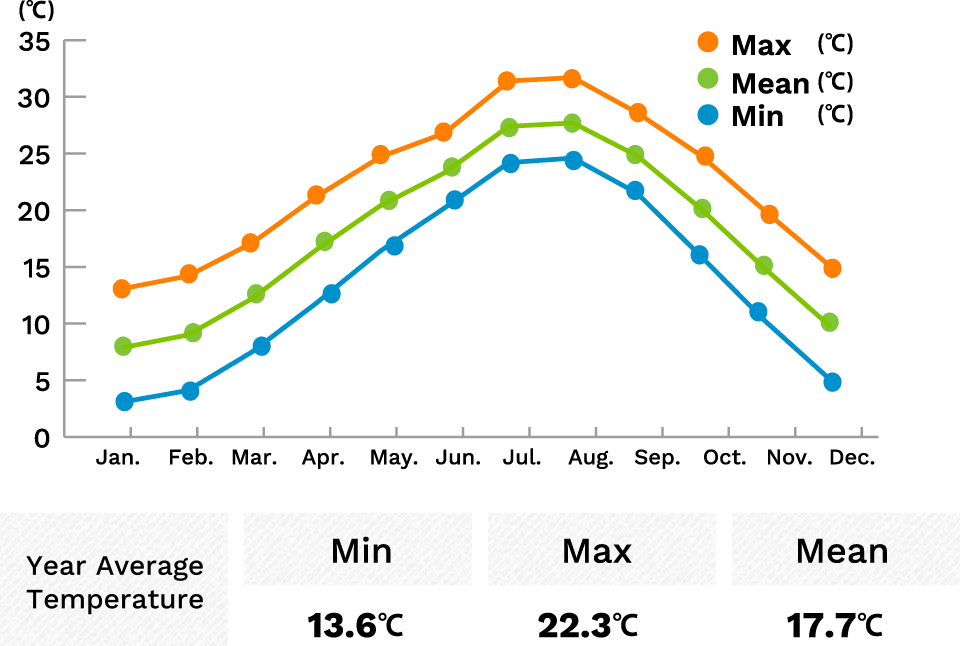 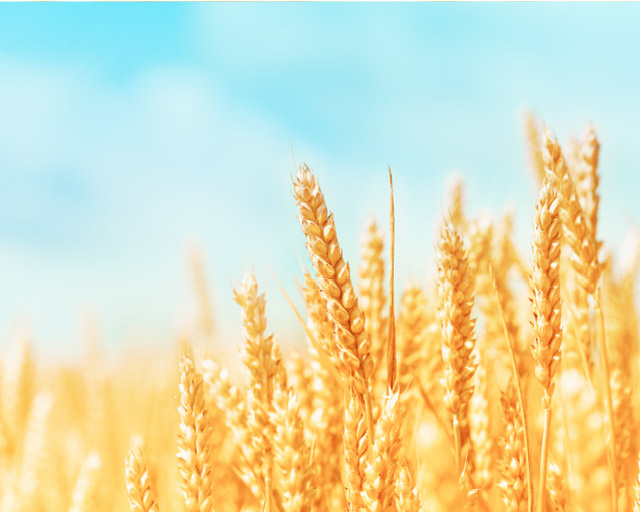 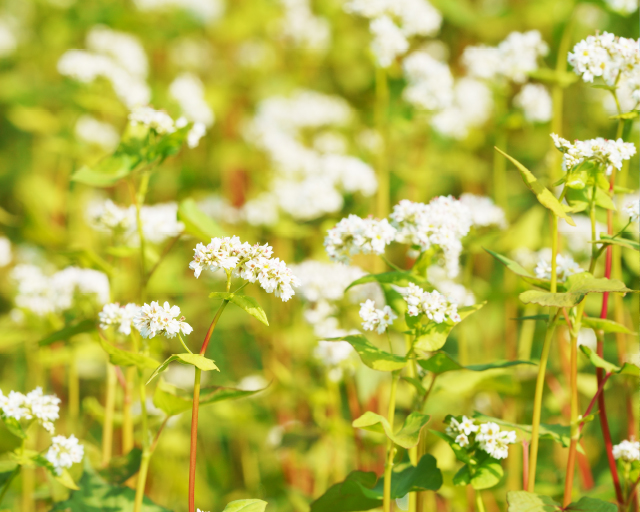 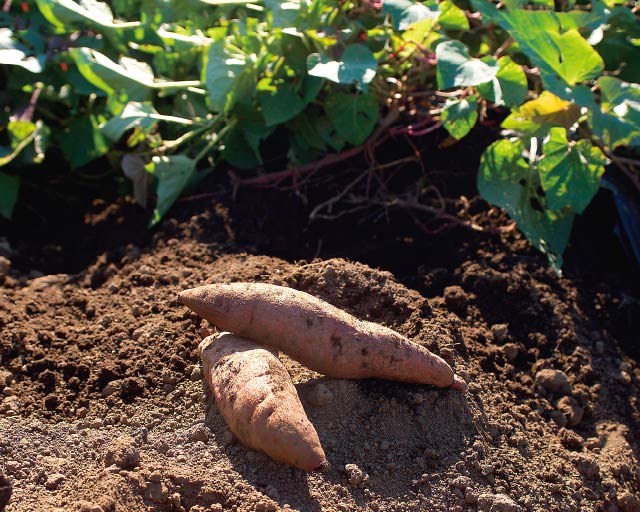 Shochu has long been a part of local customs, and played an important role in rice planting and harvest celebrations. In this region’s dialect, like nearby Kagoshima, drinking shochu is referred to as “dare-yame” which translates to “stopping fatigue.” Above all else, this praises shochu’s energizing effect. “Dare-yame” is how Miyazaki locals welcome the end of a long day.

One of the more notable histories about Miyazaki shochu involves its alcohol percentage. While the majority of shochu has 25% abv, the ones sold in Miyazaki contain mainly 20% abv. Some distilleries even sell the same brand of shochu at 20% abv locally and 25% abv for distribution outside of the prefecture.

This phenomenon dates back to the postwar period when cheap, poor-quality moonshine flooded the market. As a countermeasure, the government enacted the Liquor Tax Special Measures Law in 1953. This permitted sales of 20% abv shochu at a lower tax. The reasonable price point and the smoother taste of 20% abv shochu won the heart of Miyazaki people, and has been popular ever since. 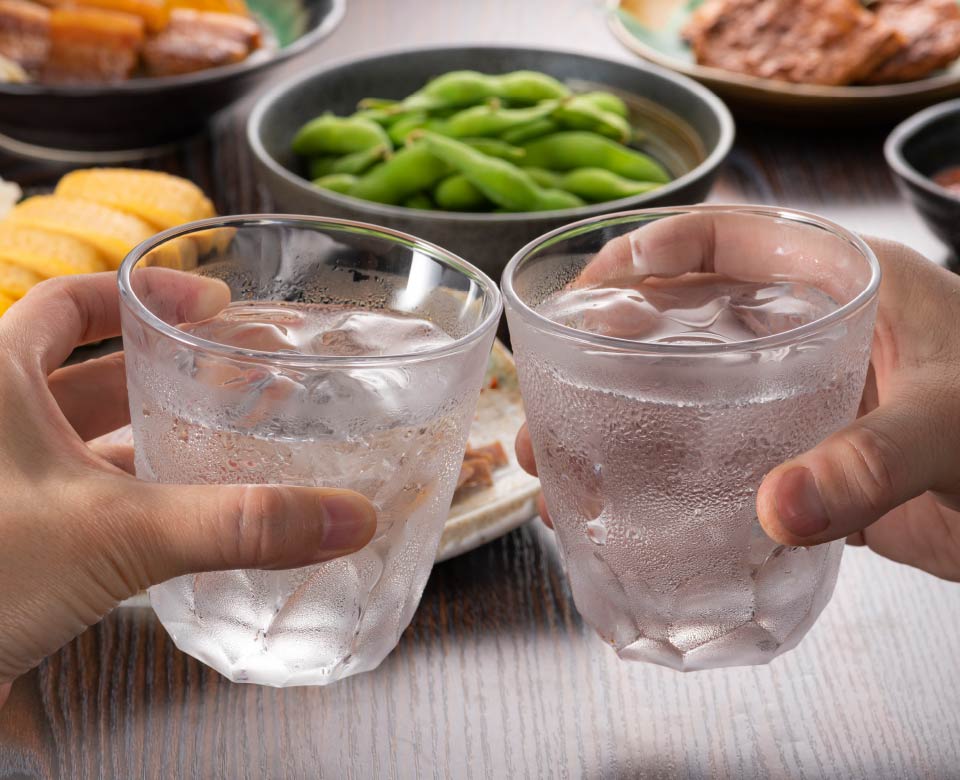 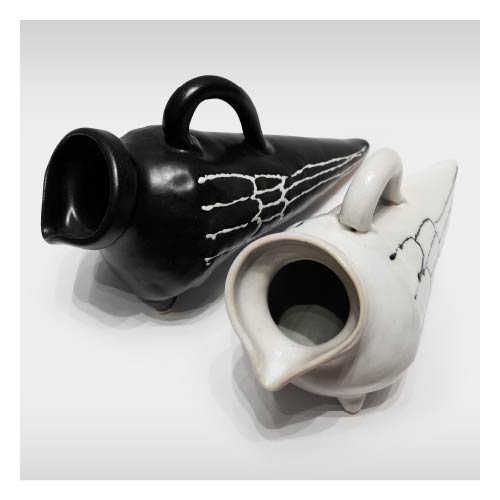 There is a unique, bird-shaped ceramic shochu vessel from Miyazaki called hato tokkuri. Hato tokkuri, meaning dove-jar, is used to heat shochu and sake over a fire or by sticking it into the ashes inside the fireplace.

Miyazaki shochu boasts Japan's overall top production volume. It also encompasses a wide variety of base ingredients that reflect the region's diversity. While other prefectures in Kyushu tend to specialize in a particular raw ingredient, Miyazaki covers them all.

This regional shochu diversity is closely connected with what is locally grown. Sweet potatoes are cultivated in southern areas around Moyakonojo, making sweet potato shochu popular here like the neighboring Kagoshima prefecture. However, sweet potatoes rarely grow in the north in areas such as Takachiho and Gokase, where rice and millet, such as buckwheat, become raw ingredients for shochu instead. 2019CY sales volume by raw material in Miyazaki are; 109,412kl (sweet potato), 12,674kl (barley), 5,472kl (buckwheat), 667kl (rice), and 542kl (others), with a total volume of 128,768 kl.

Buckwheat shochu is an important aspect of Miyazaki shochu. A distillery from Miyazaki was the first to produce shochu from buckwheat in 1973. Since then, this unique shochu has been popular for its refreshing flavor and aroma. Miyazaki is the top producer of buckwheat shochu in Japan. 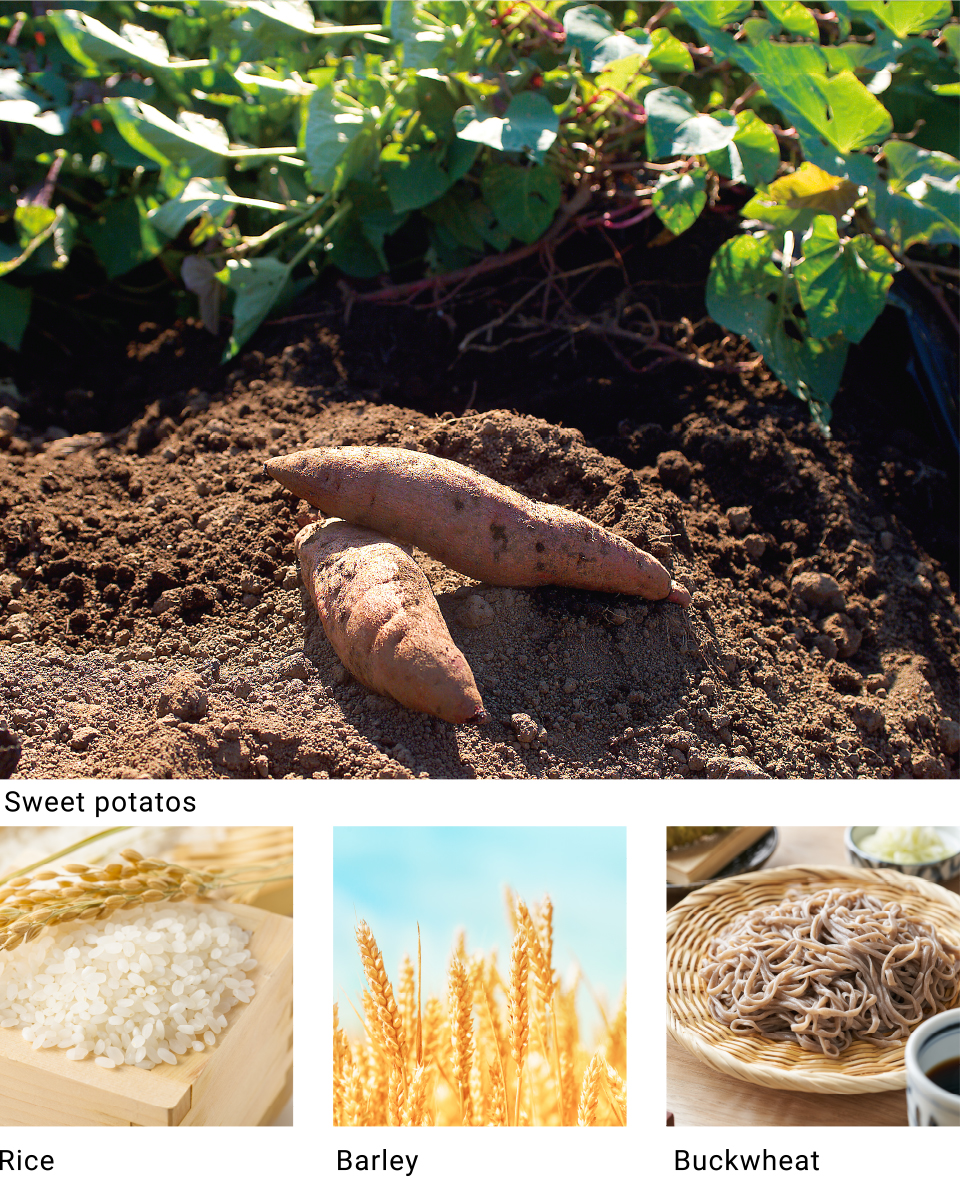 Miyazaki Shochu is registered as a regional collective trademark