between
Kagoshima and Okinawa 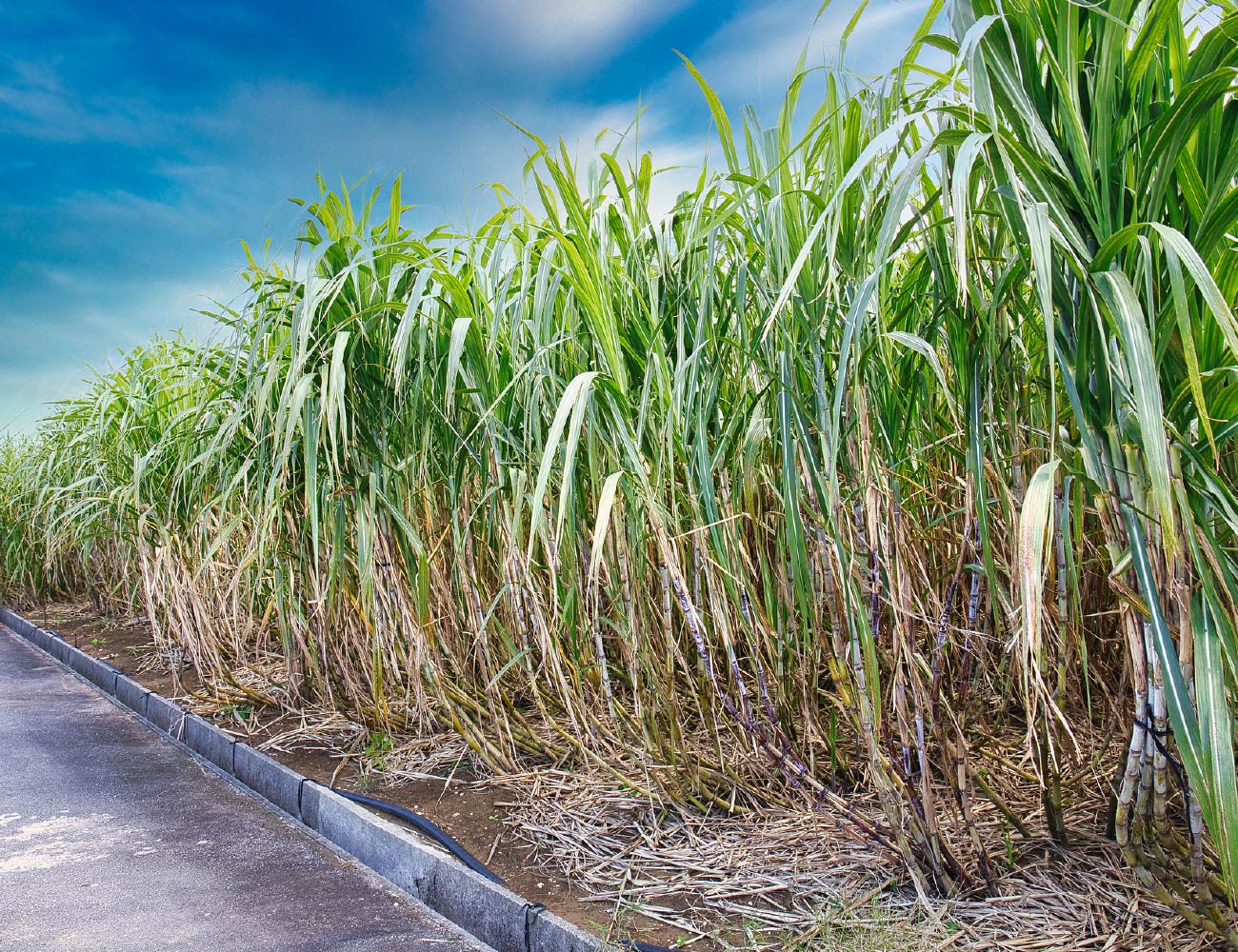 The Amami archipelago sits approximately halfway between Kagoshima and Okinawa. It contains eight islands, including Amami Oshima. The total population of the archipelago is about 120,000. It covers a total area of around1,231 km², all considered part of Kagoshima prefecture.

Amami Oshima, the largest island, spans an area of 712.39 km², sitting about 370 km from mainland Kagoshima. There are many flat farmlands in the north, mostly used for sugarcane cultivation, while most of the south is mountainous. While influenced by both the mainland Kagoshima and Okinawa, the area has its own distinct culture. These customs include their own island songs, unique textiles, and brown sugar shochu. Amami islands are the only place in Japan that is legally permitted to produce brown sugar shochu.

The Amami Islands boast abundant natural beauty. Highlights include the largest subtropical laurel forest in Japan and the coral reefs in the Sea of Amami. In addition, millions of years of isolation fostered unique biodiversity in the area, housing many of the world's rarest creatures. 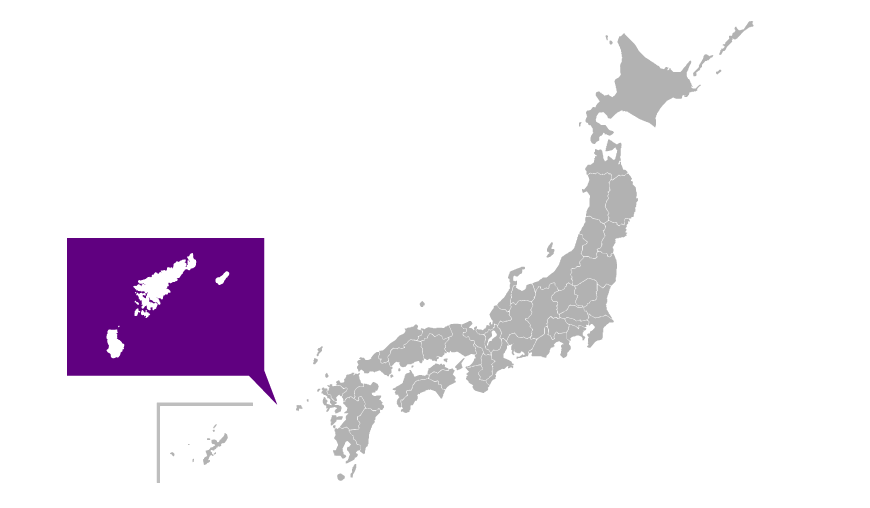 The Amami Islands are in a subtropical zone, experiencing warm temperatures throughout the year. The average annual temperature is about 21.6 °C. An annual rainfall of about 3,000mm makes the area one of the rainiest in Japan. There is particularly heavy rainfall from May-June and typhoons from August-September. The area sees many sunny days during summer and autumn and cloudy weather from winter to spring. 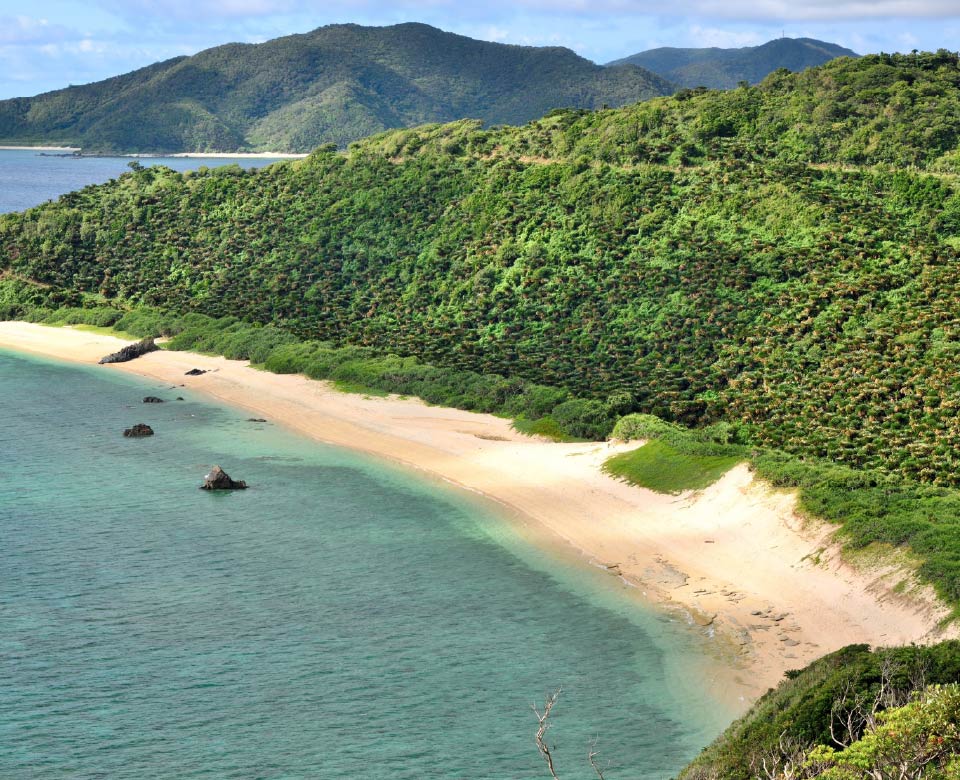 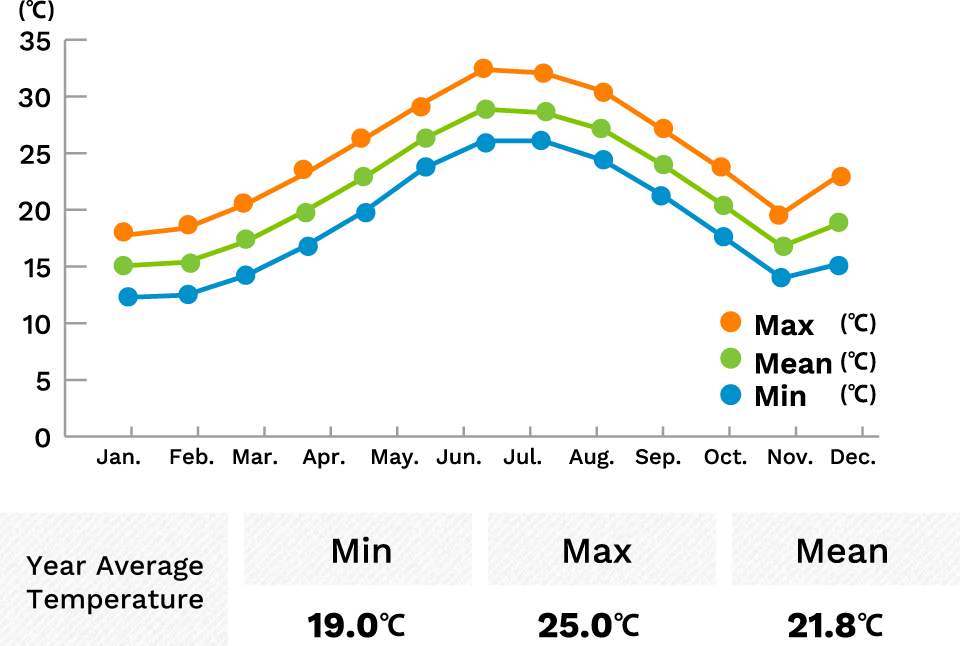 The Amami Islands enjoy suitable conditions for growing various crops due to the warm temperature and heavy rainfall. However, these crops face potential damage from abundant pests and typhoons as well.

Over 99% of the cultivated land is farmland dedicated to producing sugar cane, vegetables, flowers, livestock, fruit trees, and more. Half of the active farming area produces sugar cane. The biggest sugarcane producing islands are Kikaijima, Tokunoshima, and Okinoerabujima.

Conventional wisdom states that the first brown sugar came to Japan from a Chinese Buddhist monk over 1200 years ago. Several theories speculate how sugarcane cultivation and the sugar manufacturing method arrived in the islands. The most popular theory proposes a 17th century dispatch to the Ryukyu Kingdom learned the technique and brought it back. Subsequently, the technique spread to the other islands in the archipelago. Later, the ruling Shimazu clan encouraged brown sugar production, making it the main product of Amami. 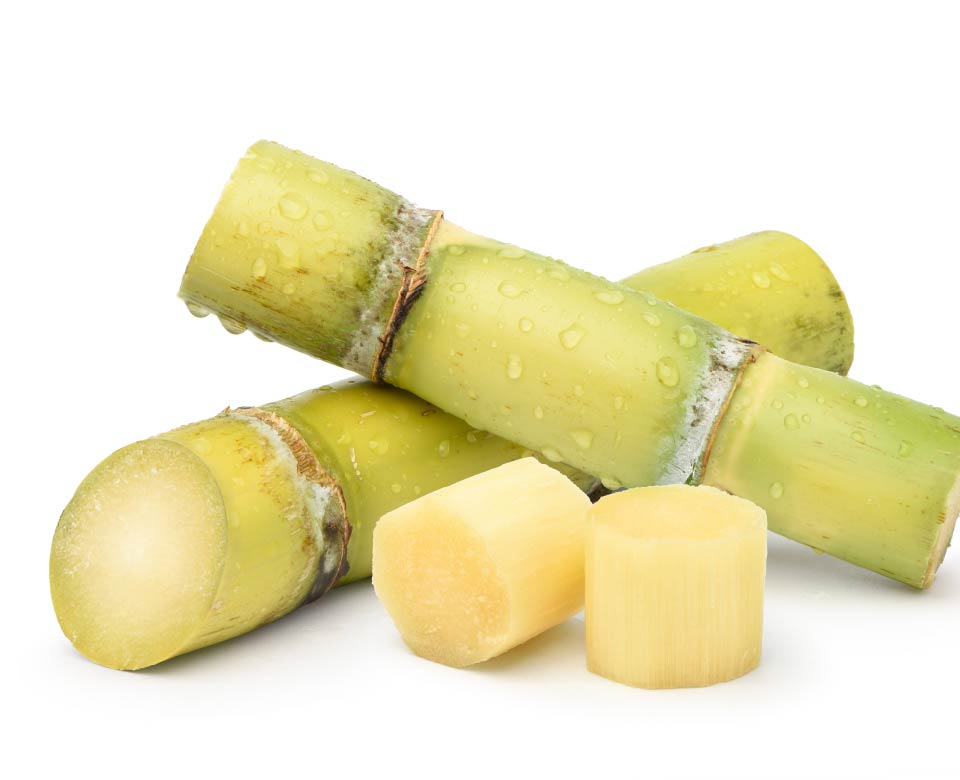 Historically, the Amami Islands experienced rule from several outside forces, such as the Ryukyu Kingdom during the mid-1400s to early 1600s and the Satsuma domain during the early 1600s to 1871. The United States government also declared rule over the area after the Second World War until 1953.

Most likely, awamori consumption arrived in the archipelago by the mid-1500s through frequent interaction with the Ryukyu Kingdom. Awamori production methods may have also come to Amami during this period. The first potential mention of brown sugar in shochu comes from the 1800s in the book “Nantou Zatsuwa.” Written by a Satsuma official, the book contains a description stating “the juice of sugar cane is sometimes added to the shochu.” However, before the 20th century, the main alcoholic beverage produced on the islands was still awamori.

After years of restrictive legislation in the Meiji era, the first distillery of the archipelago opened on Okinoerabujima in the Taisho era. Under postwar US rule, shochu makers faced harsh base ingredient shortages. As a result, they made shochu using cycads, pumpkin, morus alba, and brown sugar. US occupation law limited the export of brown sugar. This led to widespread production of brown sugar shochu instead of shochu made with hard-to-find rice. Notably, koji was not used during this time.

When the Amami Islands returned to Japanese rule in 1953, the law classified Amami liquor made from sugar as rum. Rum counts as a spirit under the Liquor Tax Law, which faced higher taxes than shochu. The producers of the Amami Islands earned special permission under the Liquor Tax Law to continue making brown sugar shochu. The only condition was the inclusion of rice koji during the production process. This is when brown sugar shochu earned official legal recognition. The rice koji produces citric acid and helps the fermenting mash from being spoiled, supplies amino acids and vitamins necessary for healthy fermentation, and adds a unique flavor derived from rice, all contributing to making brown sugar shochu unique. A pork dish that is often eaten in Amami is a perfect match for brown sugar shochu that has a rich flavor and aroma. 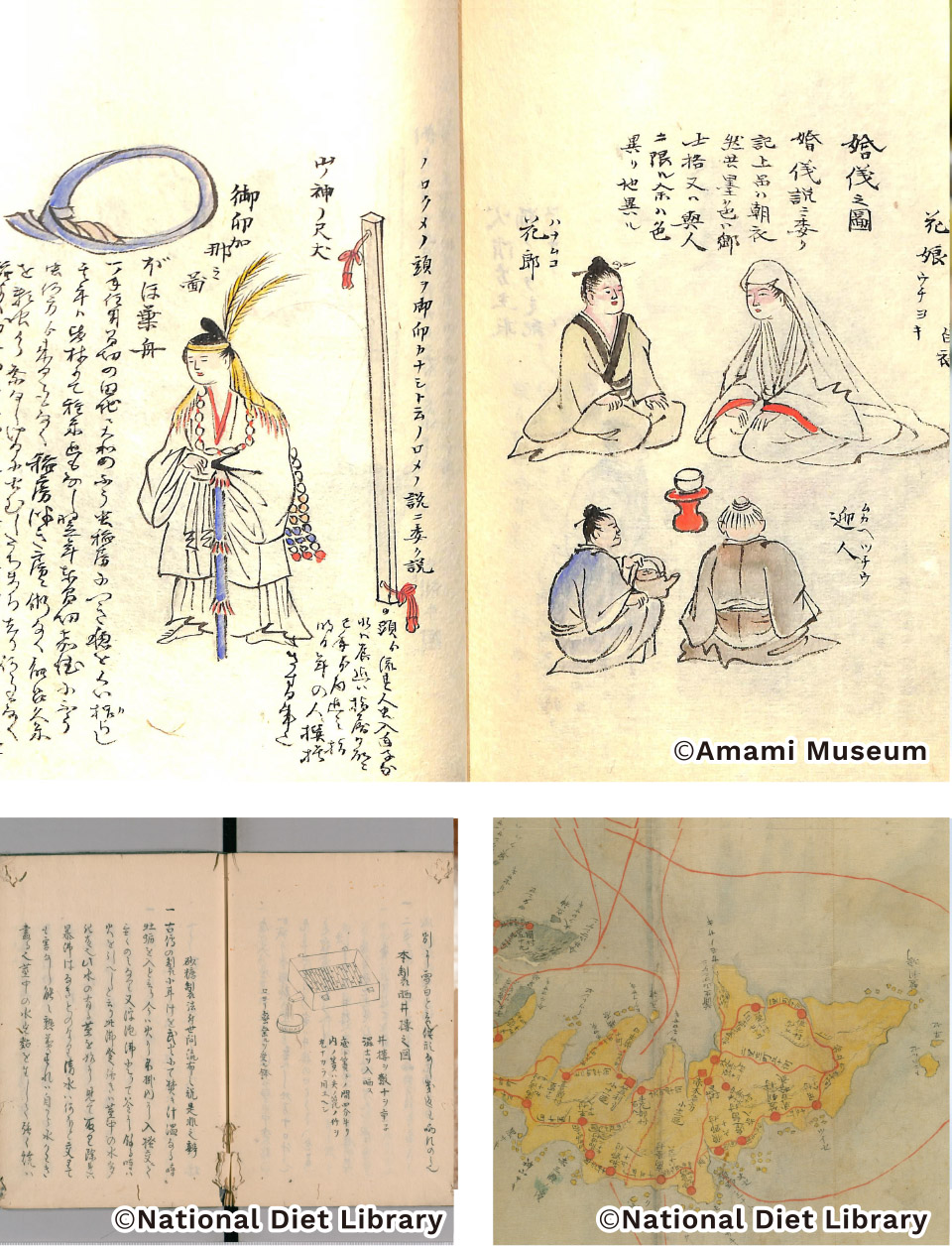 Brown sugar shochu is made from raw sugar and rice koji, and produced only on Amami islands under a unique application of the Liquor Tax Law. It is sometimes confused with rum also made from brown sugar. However, rum is made by fermenting and distilling leftover sugar cane juice or molasses as a raw material and made without rice koji. Currently, there are 27 shochu distilleries. The total production of brown sugar shochu was 7,709 kl in 2019CY.

Brown sugar is made by squeezing the stem of sugarcane and boiling down the juice. This results in about 10% of the sugar cane used in the final product. Unlike refined sugar, brown sugar is rich in minerals and vitamins. The pomace produced during the process serves as fuel for boiling and fertilizer for fields.

The brown sugar shochu has a characteristically pleasant, sweet flavor. Traditionally, the use of atmospheric distillation produced a richer flavor. However, the recent popularity of light flavored shochu resulted in an increase of brands using vacuum distillation.

The aroma changes with the serving temperature range, from chilled, at room temperature, or with hot water. It mixes nicely with juice of tropical fruits such as pineapple, passion fruit, and mango as well. 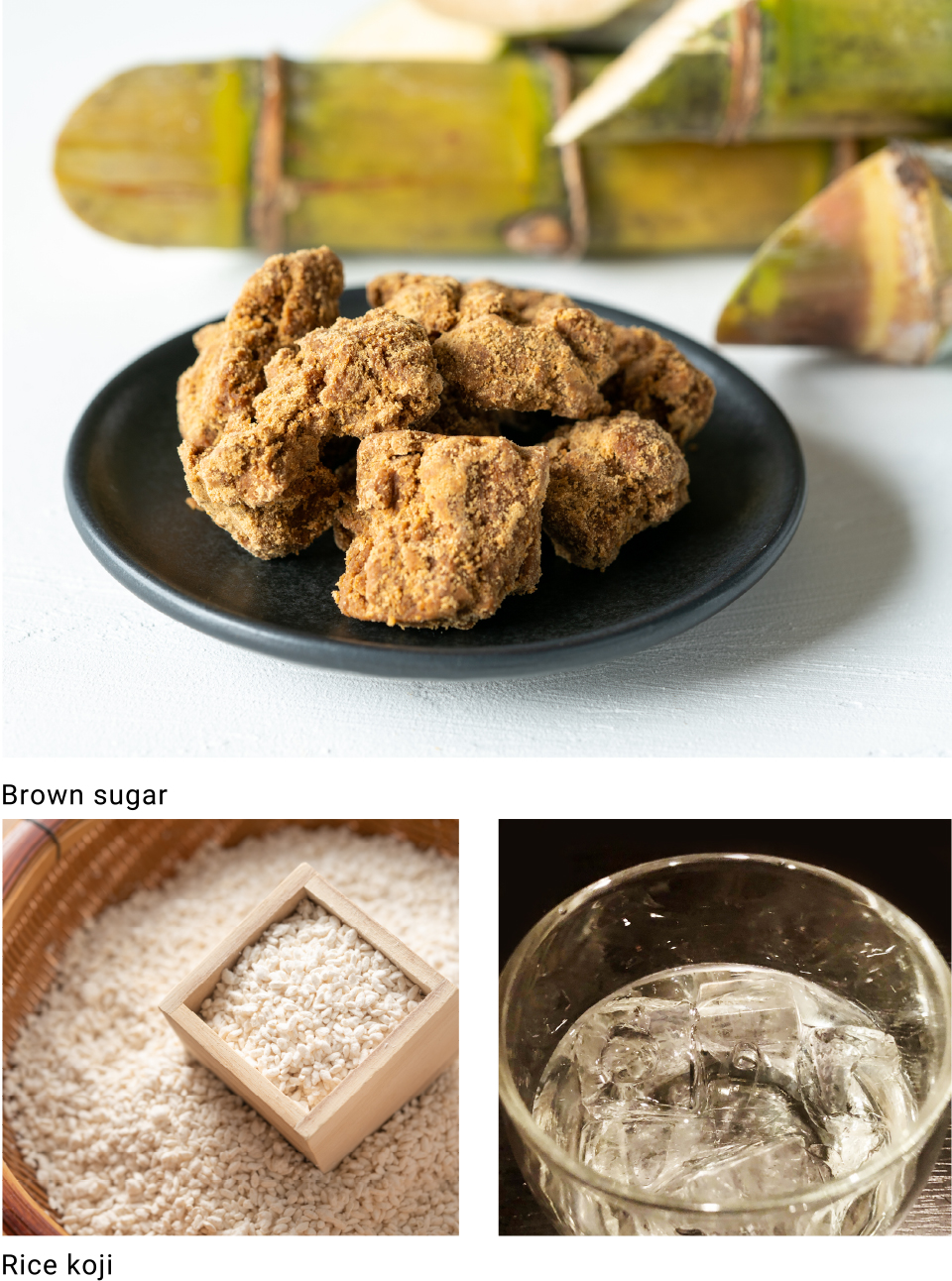